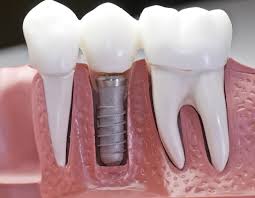 A dental implant (also known as an endosseous implant or fixture) is a surgical component that interfaces with the bone of the jaw or skull to support a dental prosthesis such as a crown, bridge, denture, facial prosthesis or to act as an orthodontic anchor. The basis for modern dental implants is a biologic process called osseointegration, in which materials such as titanium form an intimate bond to bone. The implant fixture is first placed so that it is likely to osseointegrate, then a dental prosthetic is added. A variable amount of healing time is required for osseointegration before either the dental prosthetic (a tooth, bridge or denture) is attached to the implant or an abutment is placed which will hold a dental prosthetic.
Five facts about Dental Implant
A) Ancient dental implants have been traced back to around 600 AD, when tooth-like pieces of shell were hammered into the jaw of a Mayan woman.
B) Dental implants are the only dental restoration option that preserves natural bone, actually helping to stimulate bone growth.
C) In 1951, a small group of dentists who were successfully placing dental implants formed the AAID – American Academy of Implant Dentistry – to share their knowledge on the practice of implantology. AAID is the first professional organization in the world dedicated to advancing implant dentistry.
D) In 1952, Swedish orthopedic surgeon P.I. Branemark discovered that titanium naturally fuses with bone, eventually switching his research focus to the mouth from the knee and hip.
E) 3 million people in the United States have implants, a number that is growing by 500,000 annually.